x Thank you for submitting an inquiry. We will get back to you as soon as we can.
x

Istanbul Photo Tour: Istanbul is one of the most visited places in the world by tourists. This city retains many structures. It has preserved its unique history and culture. AllTourstoTurkey therefore invites you to go on a photo hunt with the Istanbul Photo Tour. It is the perfect opportunity to see the city through the eyes of many world famous photographers, although it is true that Istanbul has too many beauties to be visited in one day. 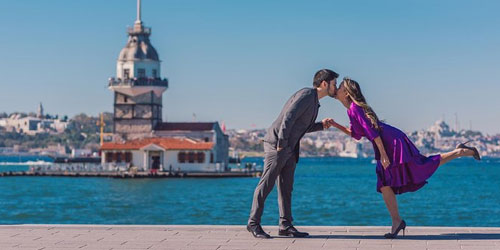 Istanbul was one of the most important and largest metropolises in the world for about 16 centuries, from the 4th to the 20th century. Thus agree to say certain important characters of the story:   "If I only had one look at the world, it would be on Istanbul." - Alphonse De Lamartine "If Earth were a nation, Istanbul would be its capital." - Napoleon Bonaparte   For 1600 years, Istanbul was the capital of 4 different empires: the Roman Empire (330-395), the Byzantine Empire (395-1204, 1261-1453), the Latin Empire (1204-1261) and the Empire Ottoman (1453-1922). Let us teach you the historic importance and value of the city with the Istanbul Photo Tour. Istanbul is a global city located at the intersection of the European and Asian continents, so the city is like an artistic mosaic made up of people of different religions, languages ​​and races for centuries, with different civilizations and cultures.

The first photographs of Istanbul were made popular in 1943 by French photographer Girault de Prangey and are now on display at the Museum of Metropolitan Art in New York (MOMA). With the inspiration that we draw from the pioneers of photography, we have determined routes to capture the most beautiful frames of Istanbul. With the routes that we have defined within the Istanbul Photo Tour, you will be able to make the most of your day, receive cultural explanations from your private guide while taking your own magnificent frames with our professional photographer.

We start our excursion from the Galata Tower, which is one of the important symbols of Istanbul. In 2013, UNESCO included the Galata Tower on the Temporary World Heritage List. After the guide has shared information about the place and its history with us, we will organize free time for photo shoots or a Istanbul Photo Tour of the tower. You can observe the magnificent historic peninsula in panoramic view from the Galata Tower. We will then leave the tower and cross the charming little alleys to Karakoy. Karakoy is a meeting point where many people come every day to have a coffee, eat in its restaurants, have a drink in its bars and enjoy the huge range of artistic and cultural activities. Continuing on the streets of Karakoy, we continue our Istanbul Photo Tour. We pass from the Galata Bridge to Eminonu. Crossing the bridge, you can photograph the historic peninsula and immortalize the fishermen who adorn the bridge. We will then pass from Eminonu to Sultanahmet Square. We will examine the German Fountain, the Egyptian Obelisk, the Knitted Obelisk and the Serpentine Column in Sultanahmet Square. We will then photograph the Blue Mosque from the outside and inside. Finally, we will make a detour to the majestic Basilica of Hagia Sophia.

We will meet at our starting point, Uskudar Pier. From Uskudar to Kabatas, we will start our Istanbul Photo Tour with a ferry cruise on the Bosphorus, where you will discover Istanbul in the most attractive way. On the ferry, we will taste simit (Turkish pretzel) and Turkish tea, two elements inseparable from Turkey. Of course, we will not forget to feed the seagulls with simit, while taking great shots.   We will then see the Maiden's Tower, one of the essential symbols of Istanbul, adorning the Bosphorus. We will continue our Istanbul Photo Tour arriving at Kabatas Pier to reach Taksim Square, which is described as the heart of Istanbul. From the moment we enter Istiklal Street, we will begin to discover this lively street 24/7, all in a historic setting. As you walk towards the tunnel (the second oldest metro system in the world), many shops, cafes, street artists and street vendors will accompany you. It would be a shame to come to Taksim without seeing the Galata tower. We will therefore stop there, the tower having been inscribed on the temporary list of World Heritage by UNESCO in 2013. Finally, we will finish with Balat, we have arrived at the last route of the Istanbul Photo Tour! The name "Balat" comes from the word "Palation", which means "Palace" in Greek. The neighborhood was known by this name due to its proximity to the Blaherna Palace. Balat has become one of the most popular places with its colorful picture windows, its historic atmosphere which gives a breath of fresh air to the streets. Our experienced guides of the Istanbul Photo Tour will give you information on all the historical events while visiting the most amazing architectural sites. Among the historic places that we will have the opportunity to see:

Istanbul Photo Tour is for you if you want to visit a city that is centuries old while capturing the most photogenic corners to forge your own memories.

We are sorry, this tour is not available to book at the moment

With one foot to the east and the other to the west, Istanbul is the perfect destination to admire a captivating mix of sights, sounds and colors.
Prepare to visit magnificent mosques, churches, fascinating museums and palaces of the sultans or take a dip in the waters of the Bosphorus to taste fresh fish overlooking the Black Sea.

We are sorry, there are no reviews yet for this tour.